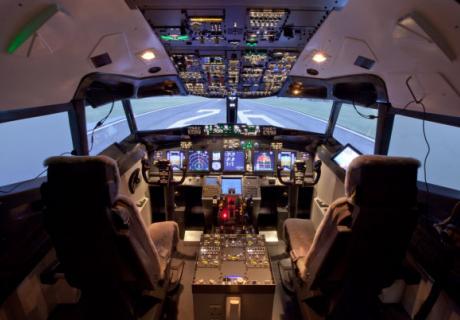 The School of Aviation has just placed an order with Pacific Simulators for a Flight Training Device (which is a simulator without motion), for advanced multi crew and jet orientation training. The simulator is representative of a single aisle, two pilot, jet transport aeroplane with weight and performance characteristics similar to a Boeing 737-800.

The simulator has the Lockheed Martin projected visual system with a 180˚ wrap around screen identical to those in Full Flight Simulators as used by airlines around the world. The database includes 24,000 airports and surrounds with animated traffic and airport ground traffic, terrain modelling and realistic weather covering all seasons and times of day and night. It has glass cockpit display with Flight Management Computers, Autopilot, Flight Director System, GPWS, TCAS and weather radar, all accurately simulating the systems in a real transport category aeroplane.

The simulator will be used by the School’s Flying Operations Unit to train students who are enrolled in the Bachelor of Aviation (Flying) program, to learn to fly as part of a two pilot crew in a modern jet aeroplane. This training will normally be undertaken in the third year as one of the electives of the Professional Pilot Program or as a component of the Graduate Diploma in Advanced Flying. After some classroom instruction on Crew Resource Management, two pilot Standard Operating Procedures and systems description and operation, students will undertake approximately 30 hours in three to four hour sessions in the simulator, ‘operating’ as both the pilot flying and pilot monitoring during normal and emergency operations.

It is expected that the device will be installed at the Flying Operations Unit at Bankstown Airport in mid-2015 and will be available to students from that time.

The acquisition of the Pacific Simulators Flight Training Device represents another step in the development of a world standard flight training program and is a tangible indication of the commitment of the School of Aviation to the provision of quality training and education across the training spectrum from ab-initio to airline entry standard.